Were the hippies right all along? Preventing ADHD in children...

Were the hippies right all along? Preventing ADHD in children…

My apologies in advance for the length of today’s newsletter, but I think you will find it interesting. Some may even find it controversial. It’s not intended as advice but merely to promote thought on the topic.

Here at Joonya we are most definitely not medical professionals, but we do have a strong interest in all things to do with mental & physical health of children. With some signs of ADHD style behaviour emerging in one of our boys, I began researching natural remedies as we were hesitant to jump on the traditional approach of medicating using stimulants.

I began my journey by watching some very interesting videos on Youtube by leading medical experts & renowned ‘bio-hackers’, discovering the world of ‘nootropics’ along the way. Nootropics are supplements and other substances that are claimed to improve cognitive function, particularly executive functions, memory, creativity, or motivation. Without big pharma paying for clinical trials of natural supplements, any evidence is largely unproven in medical terms, although the sheer number of people claiming benefit makes it hard to dispute their effectiveness. Certainly the harm done by many traditional pharma drugs make alternative therapies a tempting option.

I also read a book by John Gray, the renowned author of the 90’s bestseller “Men are from Mars, Women are from Venus”. The name of his latest book is “Staying Focused in a Hyper World” and in my opinion is a must-read for anyone who shares a similar interest in natural prevention of ADHD. The central tenet of this book is that ADHD and other neurological disorders (even autism, parkinson’s and dementia) are massively on the rise – often undiagnosed. Attention Deficit Hyperactivity Disorder (ADHD) appears in many different ways and is not always the ‘hyperactive’ type, hence the name can be misleading. It is essentially caused by ‘oxidative stress’ in the brain and produces a ‘hyper’ behaviour – eg. ‘hyper-active’, ‘hyper-controlling’ or ‘hyper-anxious’. The modern world is exposing our children and everyone for that matter to a high degree of oxidative stress in the brain, which is basically a medical way of saying inflammation. High sugar diets and increasing exposure to harmful chemicals he believes are the major causes of oxidative stress. From the moment a child is now born, they are exposed to more oxidative stress than nature intended and evolution has allowed for. By mimimising sugar intake and stress, reducing exposure to harmful chemicals (hello Joonya!) and taking appropriate supplementation, he believes we can prevent and even reverse damage to the brain.

‘Nootropic’ supplementation of certain vitamins and minerals is a huge topic in itself, and becomes more relevant as children develop. There are numerous safe things one can try to increase the production of healthy neurotransmitters like dopamine, serotonin, GABA and norepinephrine. Some of these include B-complex vitamins, and anything with high amounts of antioxidants that can fight the free radicals in a stressed brain (Vitamin C is one example). For me personally, a super low dose of the mineral lithium has gone a long way towards helping my insomnia. Minerals in particular are often lacking in the modern diet, with soils stripped of their vitality through endless use of pesticides and an ‘unhealthy’ obsession with cleanliness. Certified organic options are a must for reducing exposure to harmful residual pesticides in our childrens’ food and other products.

A person’s natural ability to focus and be of a happy, relaxed dispostion is largely based on the varying amounts of various neurotransmitters that genetics has given them, but also that nurture has allowed them. We can alter this ‘nurture’ component through good dietary and behavioural habits. For example, any activity that stimulates dopamine production (think iPads and video games for kids) is basically reducing the number of dopamine receptors in the brain. Why would a brain need so many dopamine receptors if they are getting so much dopamine through consistent video games? The end result of less dopamine receptors is the need for more dopamine through continued video games (or insert the addictive activity). Look out world if your child is suddenly taken away from that thing giving them that dopamine they now so desperately desire.

Traditional ADHD stimulants like Ritalin are designed to increase dopamine, but this inevitably leads to less dopamine receptors and an increasing reliance on the drug to stay motivated and focused. It is this very reason I believe that so-called ‘boring’ activities can be so good for children. Things that slow down their dopamine, grow the number of dopamine receptors, and allow creativity to emerge, are so healthy for growing brains. Nature play, arts and crafts, learning an instrument or other new skill – these are all activities that many kids these days would say are ‘boring’ after a video games binge session!

This article is not intended to criticise parents and their choices, because a lack of awareness is often the main cause. Busy parents who want their kids to be quiet, like while working from home with kids close by, can’t resist the temptation to babysit their child with a device. We’ve done it, we continue to do it, but now we know better we certainly try to minimize it where we can. The world is a far cry from how we were ‘meant’ to be living, so we just do our best with the knowledge we have! You don’t need to be a hippie to embrace alternative therapies. We are all now so well informed that mainstream is changing. Were the hippies just ahead of the pack? 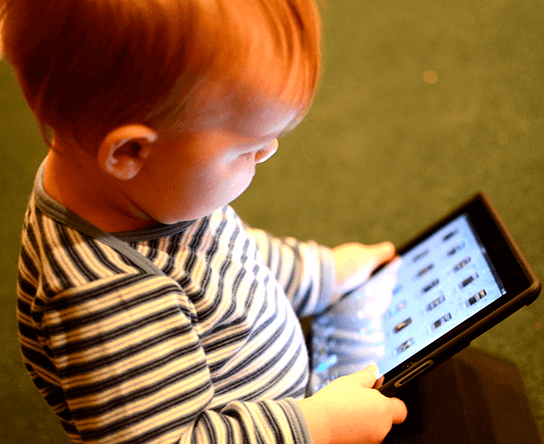